Ethics seeks to resolve questions of human morality by defining concepts such as good and evil, right and wrong, It is also known as moral psychology,

As per Indian Culture :

In Indian culture, the phrase morality and ethics is 'dharma'. Dharma originates from "dhr", which means to hold together. And thus the function of dharma is to hold the human society together for its stability and growth. Precise conduct is indispensable for the existence of the human society. The dharma in Hinduism is co- extensive with morality.

Need and importance of Ethics

Ethics is the theoretical exposition which studies human behaviour and attempts to determine- right or wrong in human action. It is also called moral philosophy. The significance of ethics is obvious. Since prehistoric period, man has always sought to know how to lead a good life and to draw up rules of conduct. Philosopher of all cultures tried to explain in what this 'good' life consisted and, especially, why precisely it was 'good'. It is not so much that traditional moral values are questioned but more radically still, that-the very 'meaningfulness' of an unchanging and universally valid morality is brought into question.

Ethics help us navigate the area between what is absolutely right and what is morally wrong. They provide the structure that helps us make a decision we can be proud of in the context of our societal, familial and personal value structures.

Morality is used in connection with the ways in which individuals conduct their personal, private lives, often in relation to personal financial probity, lawful conduct and acceptable standards of interpersonal behaviour (including truthfulness, honesty, and sexual propriety).

Difference between Morals and Ethics

Meta ethics is described by thinkers as the study of the origin and meaning of ethical concepts. The term "meta" means after or beyond, and, consequently. Meta-ethics is associated with the nature of ethical properties, statements, attitudes and judgments. Meta-ethics examines such themes as what moral questions mean, and on what basis people can know what is 'true' or 'false'.

It Deals with the “after” or “beyond, and questions such as: “What is goodness?” and “How can we tell good from bad?” It also questions the origin of ethical principles, whether they are human or divine in origin. It also deals with questions like: What are the meanings of ethical terms: right, wrong, love, compassion? It also questions whether moral judgments are universal or relative, and if they are of one kind or many.

Normative Ethics is concerned with the criteria of what is right or wrong. IT includes the formulation of moral rules that have direct implications for what human actions, institutions and ways of life should be like. It deals with questions like: How should people act? What is the correct action?

The different branches are:

Consequentialism (Teleology): Consequentialism is the form of normative ethical theories that indicates the consequences of one's conduct are the ultimate basis for any judgment about the rightness or wrongness of that behaviour. Consequently, from a consequentialist viewpoint, a morally right act is one that will produce a good outcome, or consequence.

Descriptive ethics studies people’s belief about morality. Describes and compares between objectives of different ethical theories. It deals with questions like: What do people think is right? It is different from normative and applied ethics.

Descriptive ethics investigates people's ethical morals or what actions are condemned in a civilization. It aims to find out people's beliefs about values, which actions are right and wrong and which characteristics of a moral agent are virtuous. Descriptive ethics seeks the explanation of actual choices made by moral agents in practice. It investigates the ethical codes applied by various groups. Descriptive Ethics is a value-free approach to ethics. It is empirical exploration of people's moral philosophy. 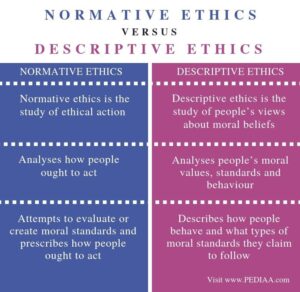 Applied ethics is a philosophical examination from a moral standpoint of particular issues in private and public life that are matters of moral judgment. This uses application of moral knowledge to practical problems and uses philosophical methods to identify the morally correct course of action in various fields of human life.

The different branches are:

There are at least four elements that create an ethical culture and behaviour of employees within an organization. These elements are:

Ethics in private relationship are generally directed by individual virtues, universal human values, religion, social norms and law of land. Therefore they comprise limited influencing factor. Ethic makes for action that one can defend publicly and comfortably. These actions are those that not only owns oneself but also the community can live with (Reddy, et, al., 2015). Ethics in private relationship are also checked by private religious law. Individual familial and community obligations have long been written into law and supported by serious sanctions from ancient time to today’s inheritance divorce, marriage and other law. In India, along with moral codes, religious institutions and constitution provision governs ethical issues in private relationship

Public relationship are more instrumental such as organizational colleagues, politicians, strangers, and other outside of one’s relatively narrow circle of intimacy (Reddy, et, al., 2015). Public Relation is a management function that engages monitoring and evaluating public attitudes and maintaining mutual relations and understanding between an organization and its public. Public could include shareholders, government, consumers, employees and the media. It is the action of getting along with people we constantly come in touch with. Public relation officers guarantee internal unity in the company by maintaining a clear communications network between the management and personnel. Its major objective is to improve channels of communication and to establish new ways of setting up a two-way flow of information and understanding.

Public relation is often understood as an occupation that is always working behind the scenes, gliding in and out troubled situations. But Public relation is also often considered to be a corporate conscience which fits well with the business ethics of social responsibility.

Ethics in public relations can come into play at:

There are code of professional standards for the practice of public relation to meet goals. Such as