The word Kathak has been derived from the word Katha which means a story. Kathakars or story-tellers, are people who narrate stories largely based on episodes from the epics, myths and legends. It probably started as an oral tradition. Mime and gestures were perhaps added later on to make the recitation more effective. Thus evolved a simple form of expressional dance, providing the origins of what later developed into Kathak as we see it today. UPSC aspirants need to know the basics of Indian Classical dance forms. Syllabus Art and culture in UPSC mains GS paper 1 has Indian classical dance forms and Indian folk dances along with other types of litereary and performing art forms. 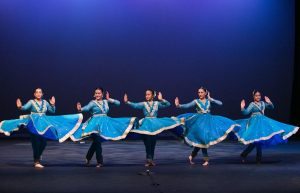 Today, Kathak has emerged as a distinct dance form. Being the only classical dance of India having links with Muslim culture, it represents a unique synthesis of Hindu and Muslim genius in art. Further, Kathak is the only form of classical dance wedded to Hindustani or the North Indian music. Both of them have had a parallel growth, each feeding and sustaining the other.

Indian Classical dance foms are one of the most important topics for UPSC Prelims. To read More articles on Art & Culture click here.