There are three kinds of questions asked: 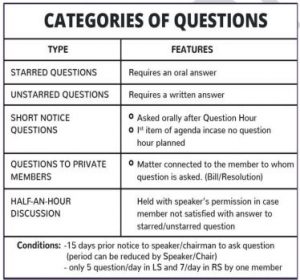 Question Hour in both Houses is held on all days of the session. But there are two days when an exception is made.

Parliamentary proceedings are important source of questions for UPSC prelims, because of the factual details in these topics. IAS candidates should be well aware and thoroughwith these topics